TouchArcade Game of the Week: ‘Book of Demons: Tablet Edition’

Book of Demons is a hack ‘n slash dungeon crawler blended with a deck-building strategy game, and it has become a massive fan favorite on Steam since its original launch a little over a year ago. It’s also a game that due to its nature would be a perfect fit for the touchscreen. Developer Thing Trunk realized this too, and so this they week released Book of Demons: Tablet Edition ($4.99) on the App Store. And just as we all figured, this game sings on Apple’s tablet.

Book of Demons features an 8-10 hour campaign made up of procedurally generated dungeons, and if you complete that there’s an endless mode waiting for you as well. It also has a really neat feature where you can choose how much time you want to spend playing and the game will intelligently generate a dungeon to fit into that amount of time. Again, this is an amazing feature for a game on mobile where you might only have a few moments to dedicate to playing.

There are also more than 70 different monsters and 80 base card types that have Rare and Legendary variants, which the game claims makes for more than 100,000 possible variants. You can choose between three different difficulty modes too. There’s the Normal mode, a Roguelike Mode that features permadeath and extreme challenge, or a Casual mode if you just want to whack on enemies for a while without too much stress. On top of everything there are three different character classes to play as, each with unique traits and abilities.

Basically there is A LOT of content to keep you busy in Book of Demons: Tablet Edition. About the only downside is right there in the title: This game is only available for the iPad. As someone who primarily games on my iPhone, this is a major bummer, and I know there are FAR more iPhone owners out there than iPad. I think it would be totally doable to rework Book of Demons to work on the smaller iPhone screen, especially in light of the great work Feral Interactive has done brining games like Tropico and Rome to iPhone. Thing Trunk has no plans to do that at this time but also aren’t ruling it out if the iPad version sells well and there is enough demand.

So if you DO own an iPad and want an excellent and very unique dungeon crawler to play on it, I can heartily recommend Book of Demons: Tablet Edition, especially at its paltry launch sale price of just $4.99. 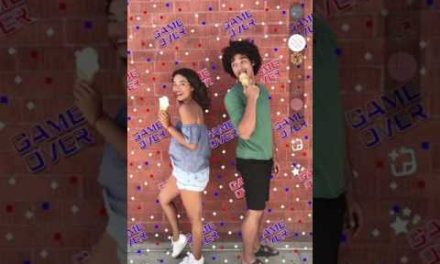 You can now add links, voice filters, and backdrops to your Snaps