Supercell is adding a 2 vs. 2 mode to Clash Royale 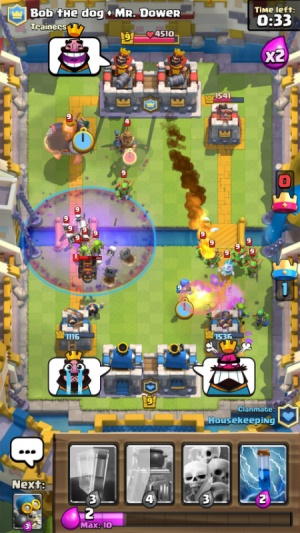 If you thought you were over your Clash Royale addiction, think again. Supercell is adding a 2 vs. 2 mode to the game according to the latest episode of their Radio Royale podcast, and, well, it sounds like it could get pretty crazy. The mode’s titled Clan Battle, and allows players to invite another friend to join them in fierce competition against another duo, coordinating attacks in beautiful syncronisity.

Each player has their own elixir bar that refills 15% slower than in normal battles, and while elixir regen cards only affect the player who uses it, other buffs will benefit both teammates. Each team has two king towers, but they’ll be sharing a health bar. On top of all of that, they will still have to find strategies to counter the onslaught of units controlled by two enemy players. It seems Clan Battle mode is about embracing the chaos as you’re swarmed by twice the number of units.

The first Snapdragon 865 phone is official, and it’s not the Galaxy S20

Paris through the eyes of the Huawei P20 Pro

Check Out the Launch Trailer for Crescent Moon's 'Axe.io', Which Hits the App Store This Week